There is still time to enroll in PRIME Registry and simplify your MIPS reporting for 2018. The PRIME Registry Manual MIPS Reporting tool is also available now—no EHR required. Enroll by clicking here.

Tuesday, July 17 is the deadline to register to vote in the August 7 primary. If you are not already registered, you can register to vote online, by fax, or in person at your Kansas county election office.  We encourage you to consider candidates who support our Legislative Priorities.  In addition, Representative John Eplee, MD, FAAFP urges members to ask these two questions of primary candidates:

Read instructions for registering to vote.

The American Journal of Preventive Medicine published a study by Sylvia Becker-Dreps et al. titled Effectiveness of Prenatal Tetanus, Diphtheria, Acellular Pertussis Vaccination in the Prevention of Infant Pertussis in the U.S. The abstract is reprinted below.

Introduction
It is recommended that all pregnant women in the U.S. receive tetanus, diphtheria, acellular pertussis (Tdap) immunization to prevent infant pertussis. This study’s objective was to examine the clinical effectiveness of prenatal Tdap, and whether effectiveness varies by gestational age at immunization.

Methods
A nationwide cohort study of pregnant women with deliveries in 2010–2014 and their infants was performed. Commercial insurance claims data were analyzed in 2016–2017 to identify Tdap receipt by the pregnant women, and hospitalizations and outpatient visits for pertussis in their infants until the infants reached 18 months of age. Pertussis occurrence was compared between infants of mothers who received prenatal Tdap (overall and stratified by gestational age at administration) and infants of unvaccinated mothers.

Conclusions
Infants of mothers who received prenatal Tdap experienced half the rate of pertussis as compared with infants of unimmunized mothers. These results do not provide evidence to support changing the currently recommended timing of Tdap administration in pregnancy.

Access the complete article:  Effectiveness of Prenatal Tetanus, Diphtheria, Acellular Pertussis Vaccination in the Prevention of Infant Pertussis in the U.S.

This Live activity, KAFP Health Behavior KSA Group Learning Session, from 06/13/2018 – 11/30/2018, has been reviewed and is acceptable for up to  8.00 Prescribed credit(s) by the American Academy of Family Physicians. Physicians should claim only the credit commensurate with the extent of their participation in the activity. 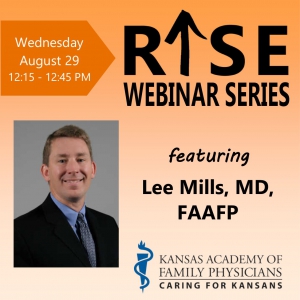 Join us for the third KAFP RISE Webinar Series, interact with Dr. Mills and learn about increasing your joy in practice, avoiding burnout and building a resilient practice and career.

This Live series activity, KAFP RISE Webinar Series, from 01/31/2018 – 10/24/2018, has been reviewed and is acceptable for credit by the American Academy of Family Physicians. Physicians should claim only the credit commensurate with the extent of their participation in the activity.

Each webinar is approved for 0.5 AAFP Prescribed credits. KAFP will submit CME earned for members who participate in live webinars.

There is no charge for the RISE Webinar Series. Registration is required to receive log-in information.

The Let’s Move, Kansas run/walk on Saturday, October 20 at Sedgwick County Park, Wichita. benefits your KAFP-Foundation. It is a great way to support your Foundation’s programs for residents and students while living a healthy lifestyle and sharing it with friends and family! Registration and sponsorship information is available at: Let’s Move, Kansas.

Register by August 20 for the early bird rate of $30. Register as a team for $3 off per registrant AND if you are a resident or medical student, use the discount code STURES18 and receive an additional $5 off!

Let’s Move Kansas aims to promote an active, healthy lifestyle for all Kansans. Mark your calendars for October 20, 2018 at Sedgwick County Park, Wichita, Kansas for this year’s event!

Proceeds benefit the KAFP-Foundation.  Join us in motivating Kansans to move, and supporting the future of family medicine!

Special thanks to our presenting sponsor, KU School of Medicine-Wichita and our platinum sponsor, Grene Vision Group. If your hospital/clinic/company is interested in being a sponsor for this event, click here for more information.

Please share your story about how the impact the opiod crisis has had on your community. Participate in the storytelling project. The project runs through the end of August.

Additionally, the AAFP is launching a clinical survey to gather physicians’ commentaries detailing how the opioids crisis impacts patients and communities, and perspectives on ways to support patient care without adding unnecessary restrictions.

The Vaccine Education Center at Children’s Hospital of Philadelphia (VEC) recently added a new web section titled Vaccine Safety References. It is a listing of journal articles developed for those who may be asked to address these issues either with their patients or more formally, in court. The page is divided into the following topics:

Check out the Vaccine Safety References web section on the VEC website.

Take this opportunity to write for the AAFP. FP Essentials™ is a subscription-only continuing medical education (CME) and Board review publication with a circulation of several thousand and is one of the AAFP’s largest educational activities.

Manuscripts must be evidence based and case oriented. Medical editors will review all proposals, select one or more for further consideration, and contact a prospective author before the final selection. Authors are awarded a $4,000 honorarium to prepare a manuscript and see it through to publication.

FP Essentials is currently seeking authors for these topics:

Find out more details on submitting a proposal.”